This is a great looking and sounding clock which does what all the best ones do – it tells a bit about when it came from.

For those who done recognise this, its the clock used to log employees arrival and leaving time at work. People were paid on the beat and accuracy of this clock which is why its so well made and in a particular way.

The mechanism in the base deals with the advancement of a set of print dials that stamp and date and time on the cards inserted in the front. It operates entirely independently from the clock apart from a single rod interface that revolves once and hour. Thats all you need if you keep maths next to the printing mechanics and it makes a lot of sense.

What is unusual about this clock is that you will notice it has two winding holes. On a normal clock, one winder would drive the chime and the other the clock itself. There is no chime on this clock of course and the purpose of the second winder is to supercharge the clocks power with two springs driving a single drive train. This would completely overpower the clock in normal circumstances but it has been done because the extra power is sent down and torque via the con rod to the printing mechanism below.

This is a brilliant design because it allows both the data about time (one revolution per hour) and the power for the mechanism to be delivered at the same time with the printing. Cleverly, it also means the movement and printing mechanism wont jam up as they may do if they were powered by independent springs that might be at difference stages in their wind.

Heres the “twin turbo” stripped down. The springs on this were the largest loop ends Ive worked with. True respect during handling is necessary with this guage of spring as it really can break bones. I dint have an unwinding tool arbor big enough for the spiggots they were so large. 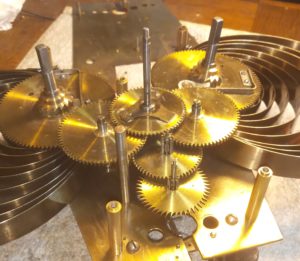 Unwinding the springs was a 90 degree rotation at a time with thick safety gloves and thick apron. In the past I’ve taken a big spring in the… well you can imagine as I was working at bench  / waist height. After that you dont worry too much about the extra hassle of protective wear even if its 10 minutes of digging around for tougher protective gear out for a 2 minute job.

I used a particularly large grandfather clock crank key wrapped in a towel to hold the arbor while I released the ratchet. Its a handy trick if you don’t have a winder – put the key on the arbour and then make a “turban” around it with towelling. This stops you having to handle a “hot” key and means if it does slip from your grip, the towel creates huge drag to stop it spinning and flying off / twisting your fingers.