When customers come to see me on Saturdays at the Antiques Centre its always fun to see what turns up. It can be anything from a 17th Century £15,000 bracket clock to a Smiths Car clock.

It can be quite challenging to make a diagnosis and offer options and costs in a 10 minute window but 90% of the time I am able to do this accurately and very much so when it comes to Franz Hermle movements. Spares for these are still made and parts are often generic accross the range so everything is fairly easy to estimate and get a price on.

Labour costs are lower, but at the end of the day its still a significant cost compared to replacing the mechanical movement with a quartz or cabled synchronous movement. For this reason, if people just like the look of the clock and want an more affordable repair, I am happy to convert clocks between movement types that achieve this objective.

The main issue cosmetically on a quartz or sychronous swap outs is matching the hands. I often have to craft hands both in terms of fit and shape to replicate originals. It can be quite a job to do properly. Then there is the job of fitting the movement securely and in a fashion that does not stress the face of the clock around the collet causing “face warp”. Fundamentally, the clock has to look the way it did or the whole point of the job has been missed. 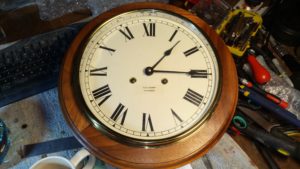 Ive not come accross a clock from Tony Guilbert of Dersingham and when I first saw it I wasnt particularly over awed. It looked like a repro styled 1940’s school or station clock.

I see a lot of the originals and its really hard to compare the new ones favourably with the originals. Its about character and the hand crafted element of the older clocks. Im not a clock snob at all but good is good which means it has to be better than something!. Part of the fun of clocks is the variety and mixture of crafts required so theres a large playing field.

Making clocks with modern manufacturing techniques is fine but the clocks have an anonymity as a a result. I know the same manufacturing methods were used on the old clocks but there was less machine automation in the assembly and construction process. For instance, the tolerances in panel size could be looser in the good old days of full employment because there was a man or woman on the production line who did the final fitting by hand. You can see that in the clocks. Even clocks by Smiths of this genre, the same Smiths of “Smiths Enfield” rifle production / armourers, have this hand finished feel.

Older examples back to the Victorian era are genuinely hand made panel by panel, with individually hand cut fixing dowells. These act as securing pegs for the back “box” of the case which can be removed by pulling the pegs out via their hand carved ball ends. Very nice. Each clock is different and I have recognised clocks Ive worked on before when they have changed ownership

Anyway, the point is I wasnt expecting much from this clock and happily accepted instruction for the cheaper electric conversion.

Having measured up the movement cavity in its various critical demensions, I opted for a high torque movement.They have better gearing for larger hands and I will use them, despite the extra cost, on anything over 4″ hands if I can. The standard movements, and even some of the high torque variants for sale, have problems with play in the minute hand. The hand wobbles around laterally meaning the time is out by a minute each side of the hour. Annoying.

So, selecting the right quality of movement and weighted hand match is important on larger faces. On this occasion I sourced hands that were a close match and then shaved them down where required to the correct proportions.

At this point I was ready to fit it all together, which providing you have done the groundwork, is a ten minute job.

Then I noticed this… 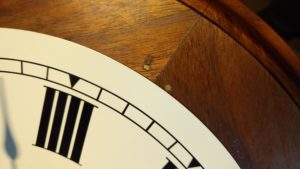 This is whats called “a good job in the first place”. Its been pinned with brass spiggots in the traditional four sections of the Victorian clocks. It could have easily been done with two panels and some glue. You wouldn’t really know, as the owner or potential buyer.

Shaving hand pinned brass flat over wood is not something I would trust a machine to do. And if a machine had done it, then why are the pins in varying position on each panel…..because a this is a hand made clock.

I had a look at the rest of the case and started to notice other things.

The joinery was perfect and delicately finished without any frills. Basically this looked like a lesson in craft joinery. Then I noticed the quality and weight of the wood. Its a heavy clock and the little Hermle wasnt contributing much weight so its probably light oak. Its hard to tell on the varnish finish but its good timber with offset grain in each section as in the originals.

This clock has a floating balance wheel regulating it. Normally, this type of clock is traditionally pendulum driven and quite frankly hard work. It was the cost of accuracy before decent floating balance wheel movements came along  because pendulums are accurate. They are however sensitive to positioning. A lot of these clocks were positioned high up on wall and hung by a single point. Winding them can stop them because you tend to move the clock a little when you do so, as any owner will tell you.

Because people and processes were measured by the beat of these clocks, in schools and factories, they had to be as accurate as possible so the pendulum was the regulator of choice often with a fusee drive to even out the power delivery over a 7 day cycle (old basic clocks gain and lose at the top and bottom of their winds to some degree).

The floating balance movement in this clock is the right choice for what it does. As a nice touch, the maker has used a two hook mounting that maintains the convenience of a hanger while securing the clock horizontally for perfect tension on the balance wheel. So many clocks with Hermle movements are badly thought out and suffer medium term wear or fragility because of it. Not this one.

It has a twin note chime that mimics the gong function of the original clocks It is a nice reference, and, actually its a nicer sound on two small bells. Consider that the norm on the older clocks is a rather dour chime bar or clang once the hammer  leather is worn.

In short, its really well designed and thought out as well as being well constructed from good materials.

So what to do?

The problem with the movement in this clock is that its running fast, even with the regulation set to account for this at maximum. This means that a few things could be wrong.

When a clock with a balance wheel runs fast it means theres may be problem with the main spring losing power, counter intuitive as that may sound. The power may also be leaking somewhere in the gear (going) train through partial obstruction or fouling. Or, on top of this, the balance wheel coil spring may have faded. Or the pinions worn. Or any or all of those.

From the clients point of view, a new mechanical movement is clearly going to be a more expensive and less practical solution than a quartz, hence the instruction by the client to “go quartz”. Common sense and great value.

We do what we are told. We really do. Ask us to repair you clock and that is what will happen. Unfortunately due to various superstitions and implausible beliefs I have concerning clocks it is impossible for me to murder one that has been hand crafted in the way this one appears to have been. If your into the Shinto belief system, everything made by man has a soul. I dont want to meet this clock on the other side if I’ve cut its movement off in a previous life.

Consequently we are going to revive or replace the Hermle at our expense and simply charge the client the quartz replacement cost.

Its that or end up as a pair of smoking boots outside the Antiques Centre having been struck down by lightning while trying to beat off a swarm of locusts.

Another reason we are doing this is because I’m not sure that this clock isn’t made by a small independent maker and it just seems a bit more personal.

A quick search of the internet produced nothing and the label on the front of the clock is a laser printed clear sticker. I bet this chap only made a few clocks very well, and no others. Nice work.