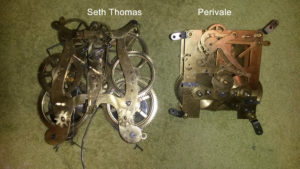 I recently did a repair on this Seth Thomas movement. Its the best looking one Ive come accross and it opens up a few questions about what progress was made over 100 years or so. Firstly Ill itemise what I like about the ST Movement…

Ok all this is typical of an Amercan movement from Walsh or Ansonia or Thomas around 1850. I think this one is a little later at 1875 but lets say 100 years go by.

So lets compare this to the Perivale style movement of 1950. Its a very typical one of the period and Ive selected one with exactly the same chime features.

Overall its a win for simplicity and innovation on the part of the USA.

The Perivale is ok and in its defence is more compact, however, I know which one I would prefer in my wall or mantle clock.