I recently undertook a clock repair and restoration for a friend in Braintree. It was a complete refurbish with two mainspring replacments as well as a strip down of the wood and replacement of the glass. It took absolutely ages and was particularly difficult as the varnish on the clock had to be stripped back and redone. All in all a very satisfying result.

Clocks such as this Smiths art deco example are becoming increasingly rare. The movements tend to have a full westminster chime with quarter hours. They wear out and it is often the case that they have to be replaced with a modern equivalent if one can be sourced. I managed to salvage and restore all the original components apart from the springs themselves which were replaced by new modern equivalents.

The clock was placed in the sitting room, beatifully framed by the back wall wich featured an Egyptian white relief inspired by Egyptian tomb art. All hand done and DIY. That was just the beginning of the surprises however. 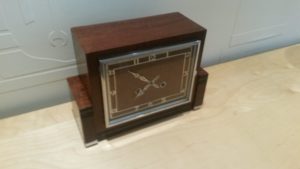 When I delivered the finished clock I was shown round the house and garden which were spectacular. The friends in question were very keen amateur egyptologists and had decorated their house with Egyptian art and sculpture. It was only when I saw this in the garden that I realised these people were SERIOUS Egypt fans. 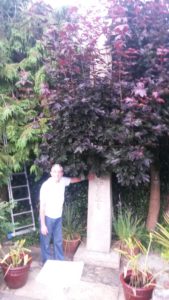 I estimate that this home made obelisk is about 25ft high. It was constructed from concrete reinforced with steel bar. Thats what I call commitment. The absolutely best thing about clock people is that they appreciate the better things in life. I meet tons and tons of the nicest people you can imagine and all have a story to tell. Theres something about mechanical clocks that attracts the more interesting people and they are all a pleasure to meet.