Ok so I may have oversold in in the title but Im going to be honest with you, I cried when I made this discovery. Genuinely. Tears welling up in my eyes. Heres the story.

I got called this morning, (by the way I am writing this immediately after the event and am still pumped about it), by a 90 year old woman with several clocks. I was expecting to pick up a couple for repair and there was nothing particularly special about the call as far as I was concerned.

On entering the residence I was duly greeted and gagged myself with a face mask that I hate wearing because its now not really that necessary and the chances of meeting anyone with covid are remote in my region, Essex. Anyway, with steaming glasses we proceeded to go over the clocks. The first one was a novelty cuckoo with a coffin movement made for about 8 sheckels or whatever currency they were using at the time of its manufacture. An awful clock to fix because the cases are glued on these units on the assumption that once it was worn out nobody would consider a fix so why make the movement removable. I have had three of these in a row which I have taken on because I take on anything and its about how much the clock means to people, not its quality. But it hasnt been profitable or fun. Hacking away at 70 year old glue on matchwood while maintaining the integrity of the joins for reassembly is almost impossible meaning B&*$% woodwork has to be done on top of fixing a movement that has no equal for bad transient quality before failure.

The woman was 90 years old. She loved the clock. I had to get it going in the minimum possible time without taking it away. So I cleaned it out with a washing brush, bent a few wires to allow for oxidation and stiffness, gave it an oil and….it worked. Even I was surprised.

Then the next clock. This is where it gets interesting. What she showed me was a completely original museum condition mantle clock of medium to high quality from the deco era. Here it is.

I have a good knowledge of Antiques which is why I work from an antiques centre. This knowledge has been considerably added to over the years of working with clocks because examples date back to the 16th century and the clock and case evolved over the decades of the centuries in line with the styles of the time. So, if you know what a clock from 1700 looks like then its pretty easy to spot other items like tables or chairs that share the same styling. Equally if you are looking at antiques with any techinical aspect, they will reflect the manufacturing methods of clocks at the time so you are able to date and identify via that association.

The clock in the photo is clearly from the Deco period and there is a hidden reference in the design. You see the deco period is defined as from 1910 onwards to the Exposition Internationale des Arts Décoratifs et Industriels Modernes held in Paris in 1925. 3 Years earlier Howard Carter had discovered the Tomb of Tutankahmun and this ploughed into the deco design of the time creating a vogue for a new kind of egyptian influenced design in what one might call the “deco movement”.

Normally the view of the antiques trade is that the best deco peices are those that cover the transitional period between the bezier curves of Noveau and the pleasantly balanced dramatic lines of hard core art deco peices. Beautifully svelt posed women in 20s dresses standing on a line formed deco plinth – the best of both worlds; the boimorphic and the modernist. This clock has a little of that. Its Napoleon hat style with its biomorphic curves blend with stright lines and flare of modernist deco. 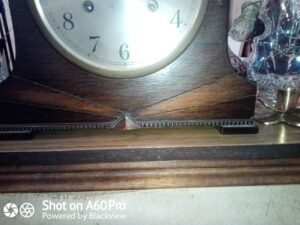 But this clock has something else in addition. A lost hidden reference to Howard Carter and Egypt.

Now this is an unthinkable error on a clock of comparative quality. You have to remember that at the time this clock was made they might, socially speaking, not have been available to the lower middle or lower classes of the time. Victorian England and the empire had created a wide middle class and wealth which prevailed into the 20th century, and prevails today.  But, still, the majority were not wealthy. The Middle class was much thinner than it is today. So, owning a clock might be compared to owning an expensive car today, or perhaps just a car in 1960 – not everyone had one by any means. So in 1925 having a clock was probably something like having a good Mercedes. Now if you buy a Mercedes and the number plate is 10 cm to the left so it shows, you take it back. You just do. And the same would have applied with this clock.

The idea that the centre point of the triangle does not intersect with the terminating point of the flared outward lines is unthinkable in deco design terms. So why is it like that? Its because its deliberate.

Its extremely clever and its a hidden reference to Howard Carters discovery in egypt iconified by the pyramids – the greatest of the tombs. You see the pyramids are arranged in a banana shaped line if looked at from far above. This, many stipulate, is a reflection of the pattern contained in the stars of Orions belt, a star constellation that is thought to have had significance to Egyptian religion.

If you look at the centre pointer you will see there are infact two triangles. One infront of the other. One side of the formost triangle has been more lightly coloured to give it a 3d effect. This is not an accident of polishing – I checked with the owner and she had never polished it. The reason the triangles are off centre is because they represent the two larger pyramids at Giza viewed from a slight elevation that allows you to see both. The reasons the lines dont meet at the top of the triangle is because they are running to the location of the third pyramid obscured from view that is OFFSET from the line of sight of the first two large pyramids . Its a little hidden cameo of the pyramids, suggested as a normal deco design value. Whats even more clever is that you either get it or you dont. If you dont get it, to the casual eye all you see is more deco lines and a central point of focus that your mind peridorically centres. If you do get it, you see the pyramids. You need to consider that at the time the clock was made there was Tutankhamun fever, enough of it for a reasonable proportion of people, albeit only the educated with their “mercedes”, to get it.

You also have to remember that at the time, the vista of the three pyramids sitting on the horizon would have been a common illustration; something people found fascinating and familiar. Whats really really clever here is that a third pyramid offset in the design would utterly ruin the symmetric design values of deco, so rather than put it in, the maker has put a secret pointer to where it is at the theoretical meeting point of the flare lines. This subtextually identifies the top two triangles as pyramids. He or she got a non sytmetrical design reference into a symetrical appearing design. I mean its brilliant and takes real flare. Alas, the movement is unmarked, and while I could probably track down the maker (The pendulum looks suspiciously like a Britiannia movement pendulum) the case and face are not branded in any way. Perhaps the designer was more inclined to put the cheeky reference in because of this anonymity. We will never know who or how but thats what makes it even more brilliant.

To be fair, I dont actualy know if this is something that was hidden at the time. It may be that the people who originally bought the clock were perfectly aware of the reference and found it appealing and in vogue, but that is certainly lost on the casual viewer today and has become a hidden reference.

Id value this clock at £400 – £600 and a museum piece. Now thats a lot for a mantle clock of this period. A really over the top obvious deco mantle of this type might go for £250 but because of the charm of the hidden message I cant see it going for less than £400. Its like antique desks with hidden compartments. They are just worth more because they are scarce and have that extra mischievous something.

Brilliant and it made my day. I felt like Carter himself must have felt. Just less. But not much less.

Oh its not for sale and Its not mine so dont even ask. If you have one…..I envy you.