Today I visited the Clock Makers Museum in the Science Museum London. It was pretty much a religious experience. I saw clocks by makers I had only seen 2D without getting to know a clock when you can see right into it and uderstand… lots of things.

The first thing that is absolutely shocking is just how good the early clock are, 16th century specially so. Theres art and passion and science in these devices, and despite being the preserve of the wealthy, it shows that there was a very real commercial and skills based Britain at that time. It wasnt all tax and farming, walloping iron with hammers and building galleons. Fine engineering and mathematics was going on. This is less surprising in the 17th century really I suppose as munitions manufacture was advancing with its own driving force and many of the crafting skills, at least, would have grown as well as the opportunities to learn them.

This clock was made by a Cap called Kratzner who was the kings clock supplier to Henry the VIII. Thats 50 years before Blackadder the 2nd to put it into context for those without a date lined knowledge of the monarchy. 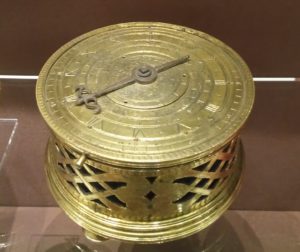 They handn’t opened it up so I couldn’t see the movement but they had another example by another maker who, more than likely produced lower quality work than Kratzner because of his Royal appointment which was based on work quality. He was the big noise in astronomy at the time and a leading mathematician and lecturer at Oxford. Theres every possibility he might have pointed and laugh at the clock innards below.

Theres a lot of precision metalworking and maths in there whatever Kratzners imagined view. Note the early use of a cone shaped cone fusee barrel which is essentially a variable ratio gearbox that evens out the surge of strength a rough steel spring has when fully wound. The stiff curve on this can be seen in the ratio of the top to the bottom of the cone. Improvements in steel generally and springs generally meant that over time fusees were not needed as spring power delivery was smooth enough over the run and new methods of regulation using balance wheels and lever escapments means the regulation would function accurately in a wider power band. Having said that, taller springs on much later clocks still use this method of power distribution over runtime and its always been widely used in pocket watches where fine accuracy defined quality. Despite its limitations and lack of technical refinement the maths and the knowledge is all in this little table clock and its shows the desire to miniaturise technology and make it portable that continues to this day.

Me and my son repair clocks and Ive seen most now up close. The exception is of course the majority of the clocks I saw today which you can only see in museums or if you know a multi-millionaire or two. The he clocks I have seen, however, are  simply a technical improvement on this clock with refinements in regulation, gearing and power. This is basicly where it started for British clocks if you dont count turret clocks.

Heres one from about 1350 or so out of Winchester cathederal and while you might not recognise the architechtural similarities I assure you they are there. these things were not that accurate either and read in quarter hours. Time didnt become that much of an issue to any more than 15 minutes. This was until Christian Huygens invented the pendulum as a regulator in 1558  and got it down to three minutes a week for the masses whos households could now afford the cheap and simple pendulum clock (comparatively). Thank Christian for having to get to work at exactly 9 or whatever but bear in mind that before it was “get up as soon as it is light, work, get beaten with a knobbly stick on principle, return to hovel when dark. , sleep, repeat” unless you were a clock maker or similar.

Anyway, its a big table clock. You cant really tell how big it is so I did a second shot…

Thanks the the random woman who was kind enough to pose for scale.

I should have asked her name really but I was in clock frenzy research mode and she was just a tool to a means. So sorry and thank you mystery woman. Also she was off less than average height so it doesn’t really do the scale thing justice bearing in mind shes a good 2 feet away from the glass case and I was using a wide angle depth distorting lens. If this was to scale this woman would be the size of bigfoot considering the unit is mounted on a 1ft plinth.

A better guide might be that you could just fit a fiat 500 in the perspex case.

Once clock makers started trying to make them more accurate thats when modern mechanical evolution really started in earnest. It spread like wildfire with the development of materials technology including of course the silicon chip which is now what tells us the time. If it wasnt for the innate curiosity we have for technology and a desire to prove we can master it, then we would still be in the middle ages and this little clock is one of the quick steps we started taking which soon turned into leaps and nuisance telephone calls from robots.

Technology advanced automation which created wealth and the two became linked in an upward spiral at an accelerating exponential rate to the bloody iphone and computer fraud. Look heres the Turing machine (2). I found it at the end of the clock exhibition not surprisingly. QED. 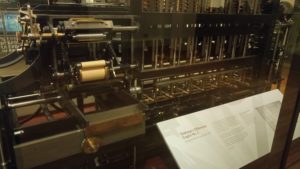 Clocks didnt start in 150 however. It was a process of miniaturisation (sound familiar?) as the turret to table clock shows.

Overall I can thoroughly recommend a visit to the clock museum in the science museum, London, Exhibition Row.

As a general review heres the low down.

Theres a couple of Tompions there and the best work of the 17th and 18th century makers. Its mainly about that and for good reason as its when the biggest leaps in craftsmanship really happened. By 1800 things were getting mechanised but all the stuff you see at the museum is hand made and quite incredible because its all the best golden age clobber!. Theres a ton of pocket watches if thats your thing and some really impressive engraving although you want to reach through the glass an pick one up for a closer look!. Its not for kids and dare I say wives. Skive off to it after work if you can get out early as it closes at about 6 I think – check the link at the end for the google listing.

Well done and thank you to the http://www.clockmakers.org/ for making this happen and organising such a well date lined example of clocks with some good internal views that give you all the engineering buzz and appreciation of the beauty of some of these things up close. The grandfathers – seriously valuable ones, are there without glass cases although the Tompions are an understandable exception. Still, you really get to see the best grandfathers in the condition they were sold in. For an enthusiast its a 45 minute tour, for the interested about 20 minutes but theres plenty more steampunk tech to see in the rest of the museum and it was two hours of selfish pleasure. Nearest tube South Kensington + 5 minute covered walk to entrance.

Heres a google business listing link to how to get there and all that stuff . If you know London its just off the staircase on the second floor of the science museum if you use the Exhibition row entrance go to the lifts and stairs at the end of the entrance corridoor.