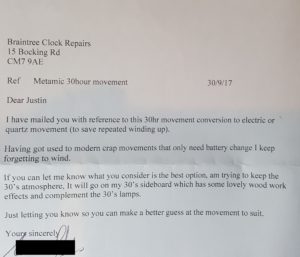 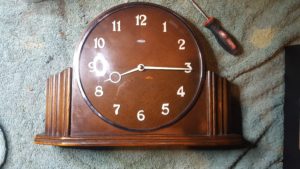 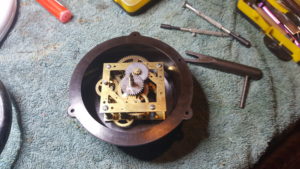 I recieved this letter and this clock. It requested a sympathetic restoration to quartz for this attractive wide faced mantle clock. I swapped the quartz in without too much trouble although the hand appetures needed resizing which is often a bit fiddly and comes with a high risk of hand destruction (worry not I carry spares for most).

The thing was that from the back those quartz movements dont look good. We all know they go in cheap clocks and in reality almost every clock you buy for the look of it as a useful timepiece. Its down to standardisation more than anything else. The mass market clockmakers need to know what appeture they are working with…what the standard is, if you like, for a cheap reliable movement that does the job no frills. But, in the case of this this chap he clearly sort of cared about it being seen if the clock was placed on a table or large mantle – it was the subtext of the letter for me at any rate.

So a cunning plan was required.

I noticed the inner movement was almost exactly the same size (57mm) as the standard high torque quartz I had put in. The Bakelite surround enclosed it beautifully.

The problem was that three screws need to be taken off to romove the cover every time battery or hand change access is required. Twice a year at least for season change.

I therefore devised a plan to use the screw holes in the Bakelite as hangers for pegs. I duly drilled out the screw holes to 3mm, fitted 1mm/3mm pipe rod pegs. This allowed me to sink a pin into the centre of the rod to secure the peg at exactly the right angle where there was enough friction to hold the whole thing up – sort of like a friction clip spread across three spiggots. 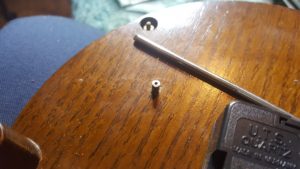 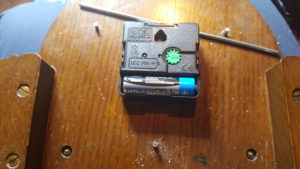 I then dummied the holes for the winder and hand turner with their original brass fittings which I angle ground off the original 30 hour movement. I used the cogs from the movement as securing plates for the dummies just because I could and it looked good – it was going to be visible during battery change etc. so it may as well look as good as the rest. 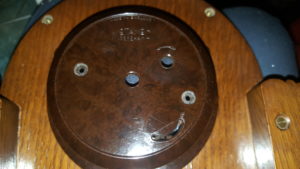 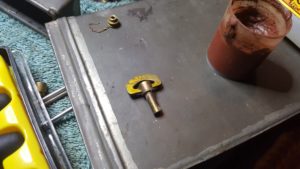 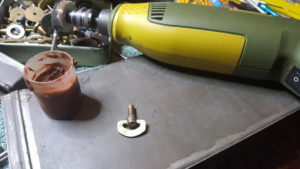 Now to be fair the speed regulator pin is missing so its not perfect but there was no way of really securing anything of that sort without drilling a fixing hole.

The butterfly key on the 30 hour Metamec is mounted on a spiggot that sticks out of the back. Because I had gutted the case, and therefore removed the spiggot, I had to cannibalise a perfectly good stock spares clock to get it. It was the only one with a thick shank I could use to fix from the inside and by this time I was in cannibal frenzy restoration mode . I even compound polished the key back to the brass so it looked shop new which for some reason had now become my aim in the project. It felt like building a hidden compartment in something – I really enjoyed it!.

This was an awesome project and one I can repeat on your clock if you have the same objectives – geunuinely authentic look with reliable modern mechs. The sphynx in the photo is contemporary to the clock, as is the base of the Grandmother clock in the background. The first half of the 20th century has some excellent standout design trends I dont think will ever go out of fashion. At the Antiques Centre the era remains the single most requested in terms of general antique product demand. I am there Saturdays if you want to visit www.braintreeantiquescentre.co.uk. Counter staff can take your clock in my invariable absence during workshop or callout hours which is basicly all the time. 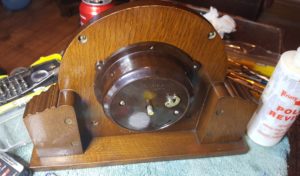 A big shout out to Paul at Polishes for making astonishing “polish reviver”. I dont do product ads or advertise on this site other than trade partnerships. I am the repairer for www.cuckoocollections.co.uk for instance and I manage an antiques centre which I often mention if theres something interesting to reference on the clock front. As far as going on about this reviver, its simply that this is good stuff and I like to see small specialists flourish when they deserve to. Its hard to find good people.

It brings faded 50’s varnished clocks back to life very well for instance. On that era of clock  the varnish tends to have flaked in the grain a bit. If you put normal polish wax on them it goes into the cracks and often remains visible as sort of inset stippling unless you really polish it hard. The reviver doesnt leave any residue I could see.

The other thing it really really does well is return Bakelite back to what I imagine is how it looked when it was made. Bakelite often has an almost walnut pattern that is hidden by oxidation. The one above was certainly like that and now it has an obvious textured pattern.

Its only £11 for half a litre which is loads and would probably do two grandfathers. I bought 250ml as I am generally skeptical but Ive used it a lot,  just to see what happens. Some of the transformations I’ve seen even after using it for a short time are impressive. Its not polish and its not cleaner – it seems to do something else. It doesn’t leave grease lines like wax but you polish it off and its..polished and glass like. It responds particularly well to high pressure e.g. a hard rub with kitchen roll seems to bring it up to a mirror finish Ive noticed.

The clock in the picture above did not have the shine you see when I got it. It was dull and slightly matt. And quite frankly a different colour.

Anyway Im only going on about it because Ive bought loads and loads of clock related chemicals from reputable suppliers that have been little better than much cheaper and often better cleaning stuff from the supermarket. Its refreshing to come across something that works well and I can genuinely recommend knowing it will reflect well on me because it will work.