Ok… Interclock. How to describe them…

I often find the best way of communicating where a clock sits in the clock landscape of things by comparing them to a car. So, for instance, and smiths 1930s mantle is a Vauxhall Vectra. It was made with the same principles of value for money, good styling (subjective obviously), and built to do the basic job well for a long time. A Small Mathew Norman carriage clock is a BMW 318. Its well made, has mid range brand kudos,  has classic straight line design styling and you cant get one at a knock down price.

This brings me to Interclock. They are generally 1985 Bentleys.

The first one of these I saw was as at a large country house. Lord whover phoned and told me he would like me to come out as his Interclock grandfather clock was not chiming. Id not heard of the maker and just booked it into the call out diary on the basis.  Seven out of ten times I can repair in one visit on a callout, and with grandfathers, there are rarely surprises in terms of design or function – I’ve seen pretty much everything.

I’m not saying I can complete any job on site, but most call outs tend to be for clocks that have been moved recently or stopped working suddenly and most of those can just be fixed with a quick partial disassembly.

Anyway, back to the Inerclock Bently. Info on Interclock is hard to find. I was unable to track anything useful down on the internet. Luckily the owner had kept the original sales brochures and spec in the base of the clock. I should have really taken a copy but from memory, Interclock were based somewhere like Kingston Upon Thames. I may be wrong on this but it was quite a good London address but not central. The clock was a top of the range job and it looked, literrally, like a pipe organ. Interclock designed and made clocks in the 1980’s and they are very grand and over the top. Styling could be described as “New Edwardian” but the glamour of the clocks is more in keep with regency design values. At any rate they tend to be huge. The pedulums are outrageous – huge affairs the size and shape of a full sized banjo.

Now, for a repairer like myself, they may as well have been made on Mars as far as any trade or guildy type design rules or principles. The construction of the cabinet is closer to that of a display case as opposed to a clock case. The one I did today (photo) that has internal lighting and glass shelves so you can stick your favourite objet d’art it there to enhance the look of the thing further. I think if you had attempted that at a London Maker between 1680 and 1860 you would have been assassinated by your guild which gives you some idea of the tradition of form and build in grandfather clocks generally.

Im going to commit and say I like them but I had to see a few before I “got it”. There is something so over the top about the way they crazily mix design style and function and still pull it off in the end result. I wouldn’t own one as you need a big room or it will completely dominate. Having said this, because they sort of look like furniture as opposed to a clock it is possible to fit them aesthetically into a smaller room than you might imagine. If your room can take a large display dresser style piece of furniture then you might like to have a look for a second hand one of these because I have a feeling they might become rare and more popular then they are. Servicing costs are high and they can be broken down for spares – specifically the movement which retails at several hundred pounds if you need to replace it – I know because I buy and recondition them from time to time. I’m after a 1930’s version at the moment which is proving really hard to source and may mean building a working movement from two broken ones as nobody has any working for sale – only broken or failed project remnants. This means that most of these clocks will end up frankenstiened into other cases and the Interclock cases will be either broken for spares or disposed of. Terrible I know, but thats what is going to happen because of the high service bills and many of them now being inherited items (or will be soon ehem!). Your average Grandfather clock buyer is in his late 30s to mid 50’s in my experience – this means that the original owners of these 80’s clocks are probably making every day count, as it were. I do apologise if your reading this as an owner in their autumn years but to be frank its a common subject that comes up on house visits, normally at the part where investment in service costs is reached, and cost justification, and it always turns to humour.

In terns of maintenance, ff your thinking of having a go yourself, think again. The head/hood of the clock does not come off. This means figuring out out the order in which you have to unscrew panels and loosen things to get the movement out. If you get it wrong it can fall apart like a Chinese puzzle and you are committed to a complete dissasembly . Because its a one part chasis you only have the side panels to see in and how its put together. Invariably this isnt enough and you have to move the clock forward. I have rocked one or two back from a wall on my own but really its a two person job. Added to this, if you dont put the clock back EXACTLY where it was it wont run again.

This brings me to the movement. Kienigner (German) and very nice too. The problem on them is that Pendulum setting on them is very precise and easily knocked out of position if the pendulum is pushed too far right or left. Even if you remove the pendulum and are careful as you remove poke around the back of the movement, its easy to accidentally make an adjustment. Again its all down to accessibility and case design.

If you need a hand on yours email me a picture of the top section and if Ive done that model before Ill email back a few bullet points on a suggested disassembly approach. If your within 30 miles of Braintree Essex, give me a call to book a service visit rather than have a go yourself – well worth it.

The clock below is the one I did today. As you can see I managed to get it apart and found that the quarter chime trigger had jammed in the up position. The clock had not been run for several years chiming so this jam happened some time ago. I worked out that somebody had really rammed down the “silent” switch on the front and this had catapulted the trigger right back 180 degress lying on its back where it had been for 4 years.

I’m quite surprised it did this as movements are usually designed with stop pegs to avoid precisely this type of malfunction but it had got over it somehow. It had to be firmly handled to set back in place so its hard to work out where the considerable force came from to flip the trigger in this way. This sort of things happens a lot if you let a clock run down on its chime as opposed to stopping the mechanism properly with the silent switch. The problem is that the chime runs down half way through a sequence and leaves lever and suchlike inside the clock between positions. This results in a seize up of the whole clock because components assume positions they are not supposed to be in and block sequential triggers and functions.

Its sort of important to understand “why” and well as “what” the problem is you find yourself revisiting clocks when problems that apparently have been completely cured mysteriously re-occur. Its a learing curve with a real business cost so you soon learn to take the time to understand “why” you have a problem if possible. 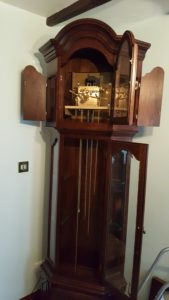 This is a corner clock by the way and relatively modest compared to the vast 8 hollow bar chime model I first saw. Ive sorted the first problem out but the clock is currently on test with a second service visit booked tentatively for next week as there are further known problems that need a week of running to diagnose properly. The Kieninger movements are very fine in comparison to, say, Hermle, however the cost of this engineering beauty is complex servicing – like and ’85 Bentley in for a 200,000 mile service.