These barrel gears are popular in all makes of wall regulators, specially those from around 1860 – 1920. Its s simple but rather ropey alternative to having to cut the pinions into the shaft and avoids complicated consturction techniques. You simply mount two bushes on the shaft and then stick pins between them. The whole thing could be done with hand tools and imagine a lot of it was although there are obvious opportunities for batch manufacturing these.

Because the movement look like they were produced to a price its fairly obvious they were using fairly soft steel for the shafts as well. This what happens.

The pins in the pinion gear wear over time and bend. Like uri-geller over 50 years. Eventually they bend so much they dont mesh properly with the cog that the are driven by. This usually means the movement goes bang one day as the pin breaks of bend so much that the driving cog slips. How fast and how badly this effects things depends on the pressures involved at the time – its usually on a full wound which is quite spectacular.

To fix this there is no quick method. Its out with the whole thing and bend the shaft straght. New the old pins need extracting and then their diameter measured. New stainless pins  need to be made and the barrel crimpted back together.

This sounds a bit like I am saying the clock is inferior. I dont see it that way. For me, as a repairer, its good common sense engineering because the eventual destruction is limited to the pinion gear as the weak point. In fixed / cut pinions the same failure of tooth integrity usually destroys both cogs. In addtion the tollerances on the barrel pinion are higher – its a rougher fit quite frankly BUT the clock is designed for this rough fit with stronger springs.

Everyone seems to chase refinement in clock production but in terms “time for the mass market” these clocks  were, and are, good solid workers in attractive understated cases. Its not surprise to me that the modern movements coming out of China at the moment (that are bulletproof) have also gone back to 19th century design principles.

Heres one from Sue’s 1920’s regulator Im doing at the moment. Notice the bend on the shaft and the curve on the pins in the pinion. The pinion goes first and then as the gears jump the shaft is bent. The shaft can be straightened manually as there, again, is tollerance in the shaft fit to the plates. All makes perfect sense to me but many disagree. They are wrong.

People have asked me if they can just send me the damaged piece. Ufortuately not – I need the whole clock as its normally a couple of fails before everything meshes correctly and delivers a solid fix and reliable repair. 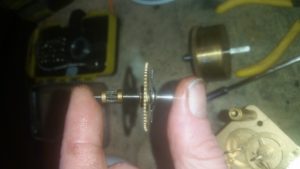