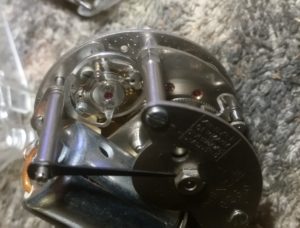 This is by far and away my favourite Metamec movement. It isnt a Metamec movement of course but Metamec used other clock makers movements extensively. I’ve even found a smiths stamped movement in one which was definitely an original fitting so they were buying from their main competitor at one point. Heresy but there you go. Im glad they did to be honest because as a Metamec specialist it gives me much more variation and I get to work with masterpieces like this 606e.

The reason its sooooo good is that its “electromechanical”. To explain…

Then there are the electromechanicals. They use electric power to wind up the spring which it turn drives the clock in the tradional mechanical fashion. In the case of the 606 it doesnt use a motor; instead it uses a solenoid. If you dont know what that is then to summarise its like a mouse trap that snaps shut by magnitism when electricity is passed through it. Now if you snap the trap shut and the jaws of that trap push a flywheel then all you need is a spring attached the to the flywheel which then drives a full mechanical clock. Its real genius because it avoids the need for a motor and also means you can drive it with a low voltage battery and let the clock take care of the mechanics in the traditonal fashion.

Its a work of art to see functioning. All these movements, whatever the mounting come with a clear perspex movement case so you can see it all going on. Theres then a metal dust cover over the whole affair for some reason but I suspect a design engineer with a bit of flair specified in a clear case.

The only thing they got wrong was to factor in leaking batteries over time. 90% of the movements I see have battery damage and its heartbreaking as the acid gets right into the solenoid and the thing is really in a mess when it gets that far. I can fix and hold spares for these but they are rare and prices are high so if you have one dont put a cheap battery in it!.

I couldn’t save this one so I had to replace the entire movement inner. I maintained the old movements mounting plates with a bit of modification – the movements are largely the same in the series but each one mounts differently on each model of clock and various plates and spacers are essential. There wasnt a lot of consistency in the production of Metamecs and they did whatever it took to survive commercially including completely changing key elements in identical looking models over the years. This means you can get most clocks with at least 4 movement options all of which change over the years. Its what makes them interesting to work on.

Heres a few pics of the finished clock. Its probably one of the best Metamecs you will see – the body is a classic and the movements the best type. It even looks good from the back. 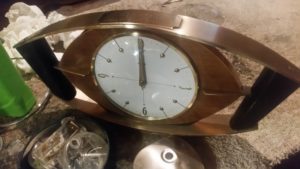