I do a lot of work on Metamecs as they were based just down the road from me in the 80’s and Ive met people who worked there as well as seen a lot of the range over the bench.

This is the Zodiac which came with every variant of movement when it was produced. I lot of people think this means that a quartz conversion should be straight forward but in most cases it is not. This particular clock was fitted with the cabled version of the movement so the appeture is more than big enough to take a standard 57mm quartz. What did need doing however was re-boring the central spiggot hole which was 3mm too small. The face plate needed the same adjustment. Its all about the hands on an electric conversion and I am lucky enough to have found a source for these that fit on the quartz spindle size.

While electric conversions are a bit “clock heretic”, it is the right thing to do on some of these clocks. I usually stock the original parts to put a clock back to “factory” but sometimes it makes more sense to put a quartz in for one reason or another – usually accessibility and convenience for older customers. 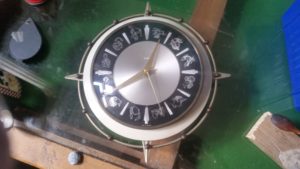