This was not a clock repair job – its a clock I came accross at a friends. Im no fan of the Nazis past or present but this is a little piece of history and quite facinating when you consider the context. This clock used to run in a u-boat. Its a particularly good example for a couple of reasons. Firstly there is no wear on the face. Normally you would see a line of wear around the number ring where years of time resets would leave a finger wear line. Secondly it is black on brass. The owner told me that most examples have / had been polished up to the brass uder the paint by bored sailors. The way it looks now is the way it would have looked in 1944 with no changes. The nazi logo features promiently and is rather ominous, however, from what I have seen of other items at auction the logo features heavily on nazi military objects, much more so tha allied forces equipment of the era. It reflects the abosolute and cultist nature of what nazis and their propaganda machine did at the time.

One of the reasons the clock has no wear on the face is that it wouldnt have needed adjusting that often as it wa, and still is, incredibly accurate. It would have been kept constantly wound on ship so it would only need ajusting when it edged out of time which would have been an infrequent occurence.

I didnt get time to take it apart, however, from my experience of other marine and bulkhead clocks I can predict movement will be beautifully engineered with the minimum of cogs and spindles. Its the same sort of design as a carriage clock and will be regulated by a platform escapement, almost certainly a swiss one, whith 6 jewells. The point about all this is that the design means that the clock can be moved or jarred without significantly altering is time keeping or stopping it. Important features in a carriage clock, wich as the name suggests, were designed towards portability. Napoleon being an early user of a carriage clock during his capaigns. 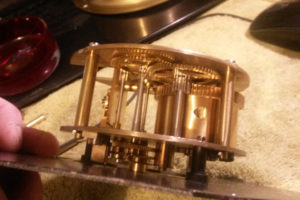 This picture shows the movement of a Smiths Marine clock from approximately the same era as the u-boat clock. They really were effective scientific instruments and were built and desigened as such. Time matters at sea, and at war, so there would have been no compromise on the quality of the time keeping.

The only other time keeping options would have been electric but electric movements of the era worked off mains power and relied on the standardised phase rate of the electricity supply. I expect they had a set of synchronised electric clocks with its own phase management on board. I say this because I have seen similar networked systems that were used in industry during the 60’s so I expect the military got there a few years earlier.

Common sense dictates that a backup mechanical clock would have been needed in the case of electrical supply failure and this is probably it. Mind you, I expect if your electricity runs out on a u-boat, what time it happened is probably the least of your worries.