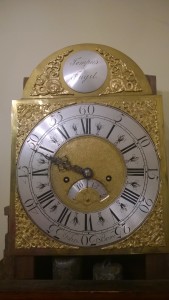 I have been asked to repair this grandfather clock, specifically the pendulum spring which requires replacing and riveting.

As a bit of practice I had a shot at accurately dating this clock from its features.

I had a good look at the dail composition, the engraving quality, the half hour markers on the chapter ring without quarter markings and the basic construction of the brass back plate (which uncommonly, is two connected plates).

The quality of the chapter ring was surprisingly good – it looked machined or turned at least although there is one small casting fault on the edge of the ring at III. The engraving looks hand performed with some tooling marks apparent under close inspection. The centre of the dial features some basic engraving around the date ring but is not of the same quality as that on the dial. The rest of the engraving on the plate e.g. tram lines on the perimeter, is also simply produced by hand. This contrasts with the spandrel which are are well cast, quite detailed and good quality with a marine theme. They are also original to the clock as there are no signs of redundant holes in the back plate. It is, as far as the “clock” is concerned, a nicely original item. Having considered all this it suggested the clock was 1730 as this is when these various features would have been concurrently evident on the dial.

I was therefore somewhat grattified when research revealed that John Bruce started his apprenticeship with John Perkin in 1723. It is known that Perkin was making clocks in York in his own right by about 1730. This ties in with the owners belief that it was a norther clock although the case was surpisingly reserved compared to later northern clocks I have come accross. Apologies for not including a picture of the case – I will add this later when I return the repaired pendulum.

Interestingly I found a picture of a John Pirkin clock which shows what he was capable of and would have driven John Bruce to aspire to ((pic on Brian Loomes’ site)). The Bruce clock I am working on is less sophisticated mechanically and decoratively compared to the Pirkin clock so I expect the clock I am working on was an early one for him. There are of course people who know more about these things than I do so any comments on this post would be most welcome – as a clockist I am information hungry!. If Im wrong I prefer to know and never take it personally.

If you are reading this and have a grandfather clock to date please do feel free to email a picture and I will publish it here with an explanation of the date I believe it was made.

Below: The Perkin Clock – click the pic to visit the site source, Brian Loomes excellent site and source of information. He also writes excellent books packed with information in an interesting narrative format.