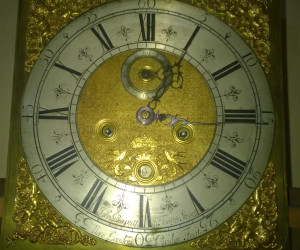 I have found a rare grandfather clock in the Braintree district.

I was asked to repair the grandfather clock pictured. If im asked to repair a clearly ancient clock or something of particularly high quality I will always do a bit more homework to make sure I really know what I am dealing with. Some clocks I have to pass on because the right thing to do is an engineering restoration where processes such as acid etching and metal plating is undertaken within specific tollerances – really advanced stuff requiring industrial processes at a small scale tailored to the clock in question. This is one of those clocks. Its not run because the minute amount of wear incurred will over centuries eventually cause wear and failure. Its a bit like keeping neolithic cave paintings in the dark to preserve their colours – you are extending an already long lifetime in the interests of truely long term preservation. Basicly IT BELONGS IN A MUSEUM as Indiana Jones would say.

The research on this particular item was really quite exciting because of its age and also because there really are not that many grandfather clocks made prior to 1700 . It was before the industry really took off and was pretty much confined to London where the the big names of the era evolved with a low output of high quality clocks although volumes really increased a great deal nationally by the middle of the 18th century. Early London clocks from 1680 to 1700 are sought after by collectors and they have an almost relic like quality and appeal. Some early long cases and grandfathers were produced between 1658 and 1680 but they dont come up for sale and I dont even know where you can see one on public view.

This clock was made by John Burputt who was a maker around 1700 and later in Londons Tooley Street having apprenticed at another London maker. He wasnt one of the mega famous makers but its rather like being in the champaign region – it doesnt matter if your not a huge label – its champaign!.

The street is no longer called Tooly’s as it is spelled on the clock face which is interesting in itself. This is a long street that is now the A200 wich would have terminated at the Old London bridge site that was 80m further down the river than it used to be (if you really want to envisage the location as accurately as possible!). He made some very good quality clocks, some with spectacular finishes in the woodwork – typical high end production of the time.

All the skills evident in the production of an early London clock appear too good to be of the era when you look at them closely. Its because clocks were at the very top end of the luxury market at the time and the engineering was esquisite with competition to produce ever more accurate clocks as almost a fashion. Burputt had what I assume was a prestige address on a central and very busy trade route from London so he must have been a well know maker among his peers who were an list of now highly regarded makers. This was at a time when London bridge had properties and shops built on it – the countrys first shopping mall in many ways. Anyway its got all right check points for an early clock including the inscription on the bottom of the dial that reads “Near London Bridge Facit”. Facit is a latin term used by artisans of the time meaning much the same as “made here / made by”. If you see a clock at a boot fair with that engraved on its worth buying.

I dont come by something like this often so I thought I would put a post up pretty much for early clock fans who will find very few pictures of a Burpett online and not close up pictures of the dial and chapter ring.  fans who I am sure will find this among the relatively low amount of internet listing on this.

There are apparently only 5 or so other Burpetts still in existence or known. Great Find.

One comment on “Burpett Grandfather Clock c1700 discovered on my travels”